Every BSDCan concludes with a charity auction for the Ottawa Mission. It’s a highlight of the conference, and we’ve raised tens of thousands of bucks for this worthy organization. BDSCan is virtualized this year, because plague. Every year, I try to come up with two unique items to contribute to the auction. One of them is valuable, or at least has a small amount of inherent worth. The other is the stupidest thing I can think of, just to see if I can get people to bid on it. I consider last year my absolute peak success in both regards.

Today, the coronavirus has messed many people up. The United States is undergoing a long-overdue racism reckoning. If you have a tech job, many (not all) of you are moderately insulated from the worst effects of both of these. I would strongly encourage every one of you to donate to bail funds.

The Ottawa Mission still needs help, though, and I am unwilling to let the BSDCan tradition lapse. So this year, I’m offering something unique and stupid. It also includes just a soupçon of humiliation for yours truly.

In October 2000 I attended my very first BSD conference, out in Monterey, California. This was before “Absolute BSD.” This was before my “Big Scary Daemons” column at O’Reilly Network. The conference sponsors flew me out on the strength of three or four FreeBSD articles I published in Sys Admin Magazine. This seemed ludicrous–but then, so did everything else in the dot-com boom that I’d so assiduously avoided. (This was the first of several times that Charles Mackay has saved my family pain.) Apparently the sponsors knew what they were doing, as meeting all these BSD folks changed my life. One day, I might forgive them.

I signed up for Kirk McKusick’s BSD Kernel Internals course. It included actual printed-on-paper slides, in a three-ring binder. When cleaning the basement, I found this notebook. 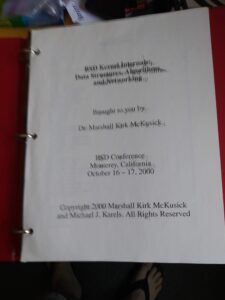 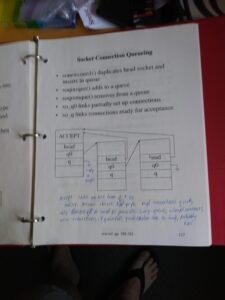 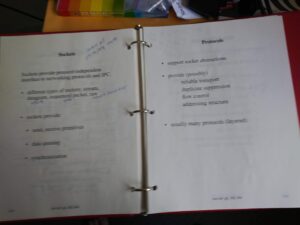 It has my notes. My bad notes. Because I didn’t understand anything, even after our esteemed doctor explained it in words of two or fewer syllables.

Not all the pages have notes. I thought I understood those slides and his lecture well enough that I didn’t need to take notes. I was wrong. The notes would have been factually incorrect, though, so it’s all the same in the end.

As part of Virtual BSDCan, I am auctioning off this historical flotsam to support the Ottawa Mission. Right here, on this web page. Comment with your bid. Comments not containing bids might be deleted.

The mission is in Canada, so all bids are in Canadian dollars. (If you screw up and pay the same number of US dollars or Euros instead, that’s okay.)

With all that’s going on it’ll to take some time for word to spread, so this auction remains open until 5 PM EDT, Monday 15 June 2020. If last-minute bids are coming in hot and heavy, I will let the auction run until they play out. I have no problem doing a virtual “going… going…. gone!”

The winner sends me a copy of their donation receipt. I mail the tutorial materials, including the Minimum Viable Three-Ring Binder that’s probably the most valuable component.

If you lose the auction, the Ottawa Mission would welcome even modest donations. So would those bail bond funds.