I’ve been writing since I was four. If you look hard enough, you might find my early writings scattered through university and high school publications and related ephemera.

My very first books, though, were neither technology nor fiction. Between 1991 and 1995 I wrote the tabletop role-playing game Gatecrasher. I thought it was a complete failure, despite going through two editions. Back in those days the Internet was limited to universities and nuclear launch facilities, so there wasn’t much in the way of feedback.

Much to my shock, it had fans. I just didn’t know about them.

And they’re still some of my very favorite book covers. I still have the covers of the first edition Gatecrasher and the supplement, Believe it or Else!, hanging my office. Back in those days, book covers were painted. The gentleman who painted them went on to do some other visual things you might have heard of. These images are scanned from my author’s copies. 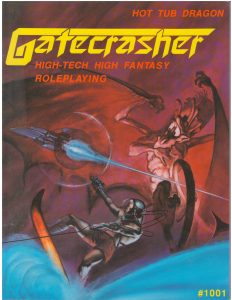 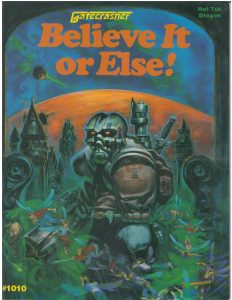 Occasionally, someone asks me when I’m going to do a Gatecrasher novel. The answer is, never. It’s almost thirty years on, and I don’t believe the world any longer. I might revisit the genre, though, and use some of the Gatecrasher concepts.

In my copious free time, of course.