(Originally written in 2005, presented with only minor changes because links have rotted in the decade-plus since. We sold the car in 2020.)

Last Wednesday, Liz’s sister Diane calls up and says “My company bought a table for the Affirmations Big Bash fundraising dinner. It goes for hundreds a plate, but my company has a couple of open seats. You want to go?”

We already had firm plans for that Saturday — a “Kill Bill”-athon courtesy of Netflix, and harassing the pet rats — but this sounded just a wee bit more interesting. Plus Liz and I don’t frequently get a chance to dress up like grownups. So, we thought about it for about three, maybe four milliseconds before jumping at the tickets.

Saturday night, the place was packed. There was an open bar, horse doovers, yellow police line around the murder victim’s masking-tape outline, art on display for auction, overall it was pretty durn posh. They had two raffles — the Big Bash is a fund-raiser for a big gay and lesbian support organization. One raffle had tickets that cost $10, with a grand prize of two nights stay in a five-star hotel in Chicago, plus many smaller prizes such as gift baskets, theatre tickets, and all that sort of nifty stuff. The other raffle tickets were $100 each, for a new bright-red Chevy SSR Roadster with all the trimmings.

As a rule, Liz and I don’t gamble. That’s because, as a rule, we don’t win. Gambling is a tax on stupidity. (OK, yes, when we were in Vegas for a week to renew our wedding vows at the Church of Elvis, we did drop a whole $2.00 on penny slots.) Charity raffles are a little different, though; they’re really a donation, with a little bit of gravy thrown on top to make that check easier to write. When I buy a charity raffle ticket, I know I’m never going to get anything other than the warm fuzzy feeling of helping people. And that’s OK.

We had a nice time from the moment we walked through the door, so we bought a handful of the $10 tickets. As the night wore on, though, we had an even better time. Everyone we talked with was really nice, and the whole affair was creative and colorful. The food was several notches above the usual hotel fare. Some people there were donating thousands of dollars, which is way out of my league, but I emptied my wallet, borrowed $20 from Diane, and bought a ticket for the car raffle.

Liz and I are normally in bed by 10PM, if not sooner, but the raffle drawings were scheduled for 11PM. We decided to wait — “you must be present to win,” after all, and with a handful of the little tickets we had a pretty good chance of getting a fruit basket or something. Good music and happy people go a long way towards keeping you awake!

At 11:00, they started the drawing. Everyone who won a prize strode up in quiet dignity to collect their winnings, shaking hands and smiling and perhaps waving at the crowd. Diane and her husband Mike won the grand prize, two nights stay at a fancy five-star hotel in Chicago. They were delighted, and immediately began discussing what weekends they had free. Moments later the other couple at our table, Laura and Ruth, won a huge amount of coffee. Immediately everyone looked looked at me and said “This is a lucky table. You’re going to win the car.”

I know better, of course. Mathematically, there is no such thing as a “lucky table” unless the game is rigged. There was a statistical chance that I could win the car, of course, but that chance was unchanged by other people at the same table winning an unrelated raffle. (All right, I did rub my car ticket on Diane and Mike after they won the hotel stay. We all make some concessions to superstition.)

Then the MC (Leslie Thompson, the Affirmations executive director) says “We finished that pretty quickly, and we have the room for a while longer. Let’s dance!”

At this point Liz is utterly exhausted, and I’m pretty tired myself. We decided to wait, though. I know perfectly well that they’re not going to draw my raffle ticket for the car, unless I leave.

Fifteen minutes later, they turn off the dance lights for good. Everyone finds a chair and stares intently at their big-name raffle ticket. I drag mine out of my wallet, just wanting this to be over with so I can go home and go to sleep. I have five chapters of my encryption book to revise tomorrow, and hopefully a sixth chapter to finish so I can get it out to the reviewers. Everyone else with a ticket is thinking “Gee, I hope I win!” I’m thinking “Do I want to discuss a process such as GPGRelay for general-purpose mail client encryption, or would it be better to detail a couple of specific popular mail clients instead and let the guys with the oddball stuff wing it like they’re used to?”

Living in the moment is obviously not my strong suit.

The MC calls out “Okay, who didn’t buy a ticket?” Two or three hands go up. “You should have bought one! But, since you didn’t, come up here and draw for us.” As the designated ticket-drawer comes up she continues “We had a lot of discussion about the ability of Affirmations staff to win the car. The real question is, how would it look if a center staffer won the car? I’ve thought about it a great deal, and I’ve decided I would look pretty darn good in that car.” The room laughed, and the volunteer handed her the ticket. The MC said “We have a winner. His first name is Mike.”

Everyone at our table spun to look at me. Diane was sitting between me and the MC, and she stared into my face whispering “It’s you. I know it’s you.”

I know perfectly well that one out of every seven Caucasian males is named Mike. Out of the thousand-plus people in the room, close to a hundred were named Mike. That little hint meant nothing.

I wasn’t quite relaxed, though. It wasn’t enough that I’m generous, giving to charity; no, now Fate was taunting me, dry-washing his gaunt hands and cackling “Go on, get your hopes up so I can crush them like a bug!” I knew the prize winner is a guy named Mike, but he wasn’t going to be me.

The MC then said, “The winner is… Mike Lowe-Case.”

Diane’s face went stark white. I wondered why, and looked around for Mike Lowe-Case to stand up and claim his prize. He was going to be a pretty happy guy, the lucky bastard.

My mind had already been made up that I hadn’t won, so I hadn’t bothered assembling the syllables into a single name.

Collecting your prize in quiet dignity was the rule of the evening, but quiet dignity is, also, not among my strong points. Leaping to my feet and screaming at the top of my voice apparently is a strong point. Three and a half years of strenuous martial arts training has given me quite bit of lung capacity; unfortunately, I kind of ruined the effect of all that volume and intensity by screaming like a little girl. I only made it to the stage because Liz caught me on one of my many bellowing bounces and shoved me in that direction.

For some reason, I wasn’t tired any more.

Ms. Thompson checked my ticket and, yes, it was the real one.

Ms. Thompson said “You know, if you don’t like the car, you can always donate it back to Affirmations.” My mind was totally blown, I had no clue if I liked the car or not. Fortunately, Liz is always there to back me up. I shouted “Honey, do I like the car?”

I couldn’t stop shaking. I’m told my face was as red as the car itself. People were so kind, shaking my hand and hugging me. Some person said “You look like you need a drink!” I shook my head — I don’t drink at all — but then someone suggested water, and I realized that I was dying of thirst, as if I’d suddenly screamed myself raw somehow. “Yes, water, please,” I said, and some wonderful person went and got me a glass and gave me a hug. I have no idea who that was; I have very little idea of anything that happened after that. 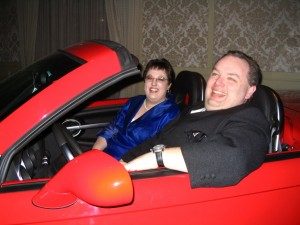 I am the proud owner of a fully pimped out Chevrolet SSR, that I would have never even considered buying for myself. You can see photos of the car here, and you can see us with the car here. (I’m told that picture should have a subtitle of “BSD UNIX Mob Boss Found Innocent on a Technicality.”)

GM called me in just a few days. Technically speaking, I didn’t win the car on display at the dinner; that car was a demo unit. Instead, GM would provide a car built to my specifications, up to a certain MSRP. I had the car picked out by the following Friday, and it was delivered into my grubby little hands by the following Friday.

I still don’t believe in a “lucky table.” I freely admit that I stopped on the way home the next day to buy a Lotto ticket, however.

Those of you tech reviewers who were expecting to get a chapter of the encryption book the following Monday: I’m sorry. Writing seems to have completely and utterly slipped my mind for some reason. I’m back on track, though, and will write twice as hard this weekend. I promise.

The only question I have left is: when I go next year do I buy a raffle ticket for the car, or do I give someone else a chance?