If you’re looking for a deal on my first Prohibition Orcs book, check out the Fantasy Steampunk bundle. You can get ten excellent books for as little as $20, and help out AbleGamers while you’re at it. 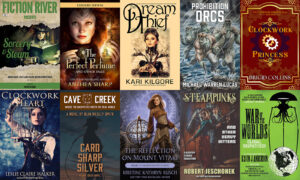 I regularly read all of the authors, and they reliably put out top-tier words. I’ve even read several of these books, and they were fantastic. I read Collins’ bundle-exclusive Clockwork Princess before it was published, and immediately demanded the sequel. You will too.

This bundle particularly excites me. Readers come slowly. Eventually some editor might say “Hey, I’m putting a bundle of books together on this theme, do you have anything?” That’s great–someone knows you exist! Someone important! Deal with that well, be professional, do your share of the promotion, and you’ll get asked again. And again.

But this time, I wasn’t asked if I had anything that would suit the bundle.

No, this time Kris Rusch seized the front of my shirt and said Orcs. I want orcs, dammit. Tell me you haven’t already bundled your orcs. It was over email, but Kris can grab you over email. I think this counts as “leveling up.”

On top of that, I have a free public reading this next Sunday. With Sufficient Rat. And another nine excellent authors.

Six days from now, the Devotion and Corrosion Kickstarter launches. I just got a print proof of the paperback and it’s magnificent.

I just finished fulfillment on the Prohibition Orcs Kickstarter, OpenBSD Mastery: Filesystems sponsorships and pre-orders. I guess this is what success looks like?

Anyway, there’s a lot of Lucas this month. Plus, I’m pushing on the last novel of the git commit murder trilogy and the mail server book. (When will that go up for sponsorships? When I have enough text and structure that I’m absolutely certain it will happen.)

Anyway, the bundle is a heck of a deal. Grab it. Come listen to me read. Click to be notified of the Kickstarter. I’m off to write the next books.

Sunday, February 5, 7pm-8:30pm EST, I’ll be one of ten authors doing a live online reading. Roaring Back at the Lion of Winter is free, but you need to register beforehand. Why require registration if it’s free? It helps keep the trolls out. The Door Goon will be checking names off the attendee list before admitting folks, just like any other exclusive gathering of cultural elites.

Why is it exclusive? Well, here’s the other authors.

I mean, look at this list. These people wrote freaking Murderbot. Sal & Gabi Break the Universe. All The Birds in the Sky. Saint Death’s Daughter. There Is No Lovely End. How to Recognize a Demon has Become Your Friend. And more, and more. Plus, freaking Murderbot.

My reading will contain Sufficient Rat.

And I’m delighted beyond reason to be on this list.

Between this, the Devotion and Corrosion Kickstarter, and a third event I can’t talk about, February looks like it’s gonna be stuffed with self-promotion. At least it’s the shortest month!

The first lesson I’ve learned is, I was too flexible for someone so easily perplexed. If I do pre-orders again folks will get the option to buy just the one book, in paperback or hardcover. That’s it. Checking and double-checking all the possible option takes up a lot of brain space.

More annoyingly, I’ve had to delay a full third of my non-US #omfilesystems preorders, and a few of the US ones, because folks didn’t include a recipient phone number in their order info.

Data is like medical radioactives in the oncology ward; necessary, but I want as little of it as possible and must dispose of it safely. I have no desire for phone numbers.

For some destinations, however, I must provide the carrier a recipient phone number before they’ll sell me postage. I have no way to tell if I’ll need a phone number until I try to buy postage.

I don’t want to demand phone numbers for everyone. I actively want to not require that information.

But I’ve spent hours today chasing folks for phone numbers, interrupting my flow of packaging because someone kindly got back to me ASAP and I really do want to get these out of my house and in your paws.

I fear I’ll need to make the hard choice next time I open sponsorships. Ah, well.

But I have all the sponsor, Patronizer, and multi-book pre-orders packed and either picked up or ready for pickup. What remains is single-book shipments, plus all the folks who owe me phone numbers. I’m calling it for the day. 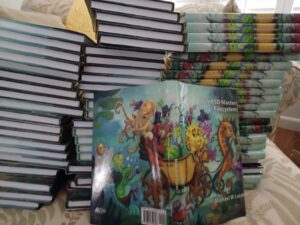 I’ll be packing Patronizer and sponsor books first, then complicated preorders, then single-copy preorders. I don’t know if I’ll have them all done today. I might. Paperbacks arrive tomorrow, so I hope so.

You know, maybe one of these days I can do some writing? Sigh…

I’ve sold print books via Aerio for a few years, but they are shutting down at the end of February. I just overhauled every single book entry on my site to point print sales at my new bookshop.org bookstore. Sales through this store pay me a larger cut than sales through other print bookstores, even though I don’t ever touch the books. You’ll pay shipping charges, however, so anything bought there is a pure Lucas Charity Purchase. Some folks buy under those terms, though, and I appreciate them, so it was worth switching.

Auditing my web site for references to Aerio led me to review my FAQ. I’ve made some updates for the pandemic age, updated and clarified a few Q&As, and puttered with the text.

I started work on the Savaged by Systemd audiobook in the summer of 2019, thinking it was short enough to be affordable, long enough to be a legit audiobook, and the right length to listen to on a commute. As an SbS audiobook is completely ridiculous, I planned to release it on 1 April 2020. I had no idea that commuting would no longer be a thing in 2020. Ah, well. I uploaded it to the various stores and forgot about it.

The audiobook was available in every store I could reach, but the biggest retailer is Audible. I supposedly get 25% of cover price on every sale. This is atrocious. They claim to have sold 48 copies, which should get me about $119.

A quick check shows I’ve received less than half of that, because Audible’s policies make the 25% payment optional.

Most of the other stores pay about 40% of cover price, but their sales are negligible.

I have pulled the audiobook from all retailers, effective today. Some stores might still have copies, but as the databases churn they should disappear. Audible in particular is being difficult, because they can’t imagine anyone deciding to stop doing business with them so they don’t provide an “unpublish” option. (I contacted their helpdesk, which gave me the secret email address to contact, who will send me questing to collect three tokens from the Fallen Angels of… well, you get the idea.)

Instead, it’s now exclusively on my bookstore. You can listen in the BookFunnel app, a browser, or download DRM-free MP3.

It’s not that I expected this audiobook to sell millions. It was an investment in exploring audiobook technology. J Daniel Sawyer charged very reasonable rates to record and produce it. I am pleased with the end product. It would be nice if the audiobook would sell enough to repay that investment. That’s impossible if the main sales channel is Audible.

BookFunnel, my ebook distributor, recently opened an audiobook beta. It’s free while in beta, but will cost $10/month when it enters production. That’s enough time for me to test passive sales through my site. Selling 13 audiobooks in a year will let me start to pay back the investment.

Will I do more audiobooks in the future? Unlikely. I’m a fringe author. My books don’t sell enough to justify audiobooks. I could save a bunch of money by using AI narration, but you might as well use your ereader’s text-to-speech feature. Voice actors, real live humans with emotions and inflection and character, are the whole point of audiobooks.

Also: 1 April pranks should have meat on them. This one generated so many agonized groans that I heard them echo in from all around the world. Worth it.

The problem with having written this many books is providing a catalog of them. One day I might do a print catalog just for giggles, but not today.

I have, however, built index pages. You can find all of my novels and story collections at https://mwl.io/fiction. My in-print nonfiction books are all listed at https://mwl.io/nonfiction. Each entry links to the breakout page containing the book.

Been meaning to do this for a while, but Copious Free Time(tm) and all that.

I believe I’m supposed to encourage you to check the lists to be sure you have everything, but I’m well aware that nobody wants everything. At least now you can easily find everything, and that’s gonna have to do.

Remember last year’s Prohibition Orcs Kickstarter? One of the rewards was the omnibus cased in “authentic” orc-hide leather.

Turns out one orc has enough hide for thirty-five book cases. Out of decency, I’m keeping the one with the unfortunately placed nipples. Alan at Studio 42 Designs has the prototype. He’s signed each case, and I will sign the title pages. 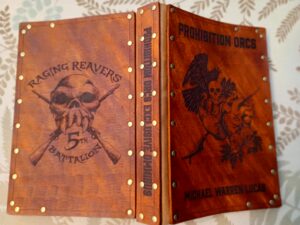 Each is uniquely textured, carved, and dyed, highlighting the many scars earned by a long-lived orc. I am absolutely delighted at how these came out, and will certainly do something similar again. But not with real orc leather. Negotiating with the family is fraught.

I will be packaging these for mailing on Monday, probably initiating a blood feud with the postman in the process.

The OpenBSD Mastery: Filesystems Patronizer, sponsor, and pre-order copies have shipped from the printer, and should arrive at my house this week. If you’re due both a leather-cased Orcibus and an OMF, I’ll ship yours together. But now I’m thinking I should have offered an edition of that book cased in blowfish hide…

Yesterday, I wrote a big tough screed about how I would push the printer to approve the OpenBSD Mastery: Filesystems print. After the horrid delay with the Orcibus, I was ready to chew steel and spit nails. Printer approval isn’t hard: a human eyeballs it and says “yeah, that’ll print,” and hits the button.

I hit “publish” and discovered that the printer had already approved it.

I have ordered all the preorders, print sponsors, and Patronizer copies. I’ve also paid the extra dollar per copy so that they will get printed within the next week, rather than sometime in the next Ice Age. Between y’all, I need to mail 116 packages.

Plus the leather-clad Orcibuses that I’m picking up Saturday.

Lots of mailing in my near future. Oh, the postman’s gonna love me!

I got the print proofs of OpenBSD Mastery: Filesystems yesterday, and they came out lovely. 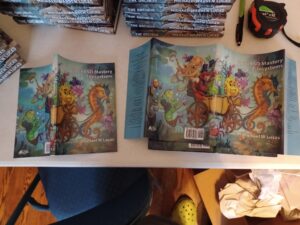 I’ve gone through them and fixed some less-than-optimal layout decisions. You never know what a print book will look like until you hold it in your hands. Several folks read the ebook already and sent some corrections that I, the tech editors, and the copyeditor missed, so I fixed them. The ebook has been updated to match. The printer now has the print files.

So, when will the print book be in stores?

That depends on the printer. I expect they’ll approve the print in the next few days, unless they pull another Orcibus and sit on it for a month. After a week or so, though, I have nothing better to do than give them pain every. single. day.

I will release the print book to the public when I can. I’ll be ordering the pre-orders directly from the printer at the same time.