The topic is Sudo: You’re Doing It Wrong. If you use sudo, you need to show up for this. Because you’re doing it wrong. It’s based on Sudo Mastery, as you might guess.

They usually record and show their talks, so if you can’t be bothered to go to Farmington Hills in December you can probably catch it on YouTube later. But it won’t be nearly as awesome.

Also, I’m planning to go to the IT in the D casual social event on 20 November 2014. I’m not speaking, just hanging out. Why?

Now that I’m a full time writer, this is my staff. 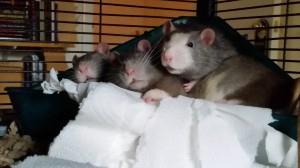 They’re perfectly sociable, and definitely cuter than most of my previous co-workers, but they’re a little short in the techie conversation department.

So, yeah. Two chances to see me in the near future. No public appearances planned afterwards. I’ll be busy trying to teach my staff how to copyedit.