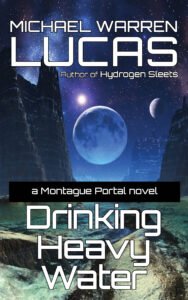 Aidan Redding’s entire goal for her time in this universe: behave. For once. Discovering seafaring aliens trashes that plan.

The answers explain it all. And ruin everything.

On a world where gravity changes every second, Redding finds herself involuntarily allied with a mathematician from Soviet Texas as she races to save not just herself but civilization.

Forget aliens. Nothing threatens Earth’s golden age so much as ordinary human beings.

Available in ebook and paperback, at all the usual suspects. Lots of links at the book entry on my site.

Grab it at any bookstore, including these.

Yes, technically, water with tritium is super-heavy water. But “Drinking Super-Heavy Water” is a stupid title, so this is what you get.

Next month should see the Montague Portal hardcover omnibus, tentatively titled Aidan Redding Against the Universes.