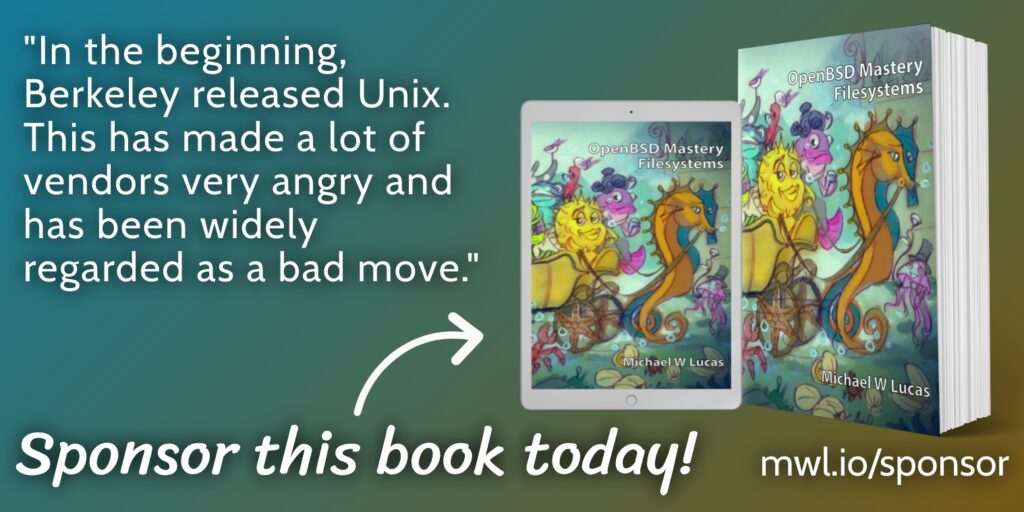 Why have I spent months on five chapters? Because everything in the core storage system of any Unix is intertwined to a nearly unholy degree. To understand filesystems you must understand partitioning, but to understand why Unix uses partitions as it does you need to understand filesystems. I have to meticulously disentangle facts so that I can start explanations at the bottom of the storage stack, but add in enough higher-level details exactly when you need them so you can make sense of why the bottom layers work as they do.

Otherwise, you’d look at computers and think “Wow, this whole thing is stupid.” Don’t get me wrong, the whole thing IS stupid, but it’s your job to understand the stupidity and I don’t need to be rubbing your nose in it.

Have I written on these before?

Does that make them easier to write?

Can I use the earlier edition of Absolute OpenBSD to guide me?

Sure, except that the book is ten years old and every detail within is suspect and must be triple-checked against the current state of the software and oh by the way that book doesn’t even mention GPT or FUSE so burn it all down. AO2e is a checklist of things that will annoy me.

The good news is, the sections that remain are fairly tidy. They’re not standalone, but they are less incestuously intertwined with other topics.