A giant tangle of stuff, and it’s all related. Plus, I want your opinion on two questions.

OpenBSD Mastery: Filesystems is at the copyeditor, and due back 15 December. I should have print in stores immediately before Christmas. Barely.

Prohibition Orcs and Frozen Talons are leaking out in ebook right now. If you buy them directly from me, they come with an exclusive bonus–To Serve Orc: Enduring Recipes from the Old Country, Watered Down for America. It’s short, but you won’t find it anywhere except my site. The print books are underway, and the leather-covered Orcibus will have to wait until I can deliver print books to the cover maker. Covers should exist in early December, so I should completely fulfill everything before 2023.

Which brings me to scheduling.

Which means I can’t realistically do one for OMF. I am considering running a thirty-day print sale for OMF on my web site, however. Paperbacks would be $25, hardcovers $40. Shipping would be $10 US, $15 Canada, and $40 rest of world. (Yeah, shipping is terrible.) You’d have the option to order one extra book, at the same prices, for the same shipping. I can cram two Mastery books, or a Mastery and a novel, in an USPS Priority Mail envelope. Shipments would go out with the sponsor shipments, but would NOT arrive in time for Christmas. Comment if you’d buy one. If nobody wants it, I won’t bother setting it up.

Which means that my next Kickstarter will be for a fiction collection (Corrosive Devotion: Ten Tales of Love that Aren’t Love Stories), probably in January 2023.

About that time, I’ll open sponsorships for the next Mastery title, “Running Your Own Mail Server.” Because, like Kickstarter, I won’t open new sponsorships until I’ve fulfilled the old ones. Prices are rising everywhere, so I’m contemplating raising print sponsorship prices from $100 to $120. If you’re a previous print sponsor, would that stop you from sponsoring again? This will let me integrate a Kickstarter into the business plan, rather than being a late addition haphazardly nailed onto the side.

For similar reasons, the ebook of OpenBSD Mastery: Filesystems will be $12.99 rather than $10.99. This means that while the Kindle version will be available at any number of bookstores, it will not be in Amazon’s Kindle bookstore. Amazon will have the print edition. Amazon is no longer a viable e-bookstore for my new shorter nonfiction, mostly because I’m not willing to screw my readers.

That’s the reasons for the schedule.

Speaking of schedules, I have once again completed all current writing projects simultaneously and now must perform a laborious cold start. I truly must figure out how to de-synchronize my multiple projects.

After far too long, I have finished a first draft of OpenBSD Mastery: Filesystems. Sponsorships are now closed.

I’m asking tech reviewers to get any comments to me by 15 October 2022. That’s four weeks. It might seem tight, but experience shows that people either get their comments to me immediately, or wait until the last possible weekend. I’m not complaining–I do exactly the same thing. Please return any comments either a) in plain text, with enough context that I can find them when page numbers change, or b) as annotations directly on the PDF.

My tech reviewers are now in their third decade of winning the prize for “most likely to use many different PDF readers.” A file that works for one won’t work for another. I work around this by distributing three PDFs of the manuscript, each identical in contact but prepared differently. Everyone should be able to find one that works for them.

If you’re interested in doing a tech review, please drop me an email (mwl at mwl dot io) saying who you are, why you would make you a good reviewer, and that you won’t share the manuscript. (Piracy is bad, but having my name on an unreviewed and thus certainly incorrect document is horrifying). I’ll ignore responses that can’t follow those instructions, because whenever I don’t I get difficult-to-decipher feedback. (I have previously received PostScript diffs, and… no. Just no.)

I’ll be turning my attention to the Prohibition Orcs copyedits next. Then it’s back to the Epic Giant Fiction Project, and another tech book, title TBA.

Why have I spent months on five chapters? Because everything in the core storage system of any Unix is intertwined to a nearly unholy degree. To understand filesystems you must understand partitioning, but to understand why Unix uses partitions as it does you need to understand filesystems. I have to meticulously disentangle facts so that I can start explanations at the bottom of the storage stack, but add in enough higher-level details exactly when you need them so you can make sense of why the bottom layers work as they do.

Otherwise, you’d look at computers and think “Wow, this whole thing is stupid.” Don’t get me wrong, the whole thing IS stupid, but it’s your job to understand the stupidity and I don’t need to be rubbing your nose in it.

Have I written on these before?

Does that make them easier to write?

Can I use the earlier edition of Absolute OpenBSD to guide me?

Sure, except that the book is ten years old and every detail within is suspect and must be triple-checked against the current state of the software and oh by the way that book doesn’t even mention GPT or FUSE so burn it all down. AO2e is a checklist of things that will annoy me.

The good news is, the sections that remain are fairly tidy. They’re not standalone, but they are less incestuously intertwined with other topics.

And may Dog forgive me for what I have unleashed.

There’s about sixty hours to go on the Prohibition Orcs kickstarter. I haven’t done the math yet, because the campaign is not over yet and I don’t have money in hand, but it appears that I’ll net about as much on this Kickstarter as I would selling the books to a midsized publisher.

The Kickstarter is undoubtedly a huge amount of work. But it’s less mental labor than selling the books to a publisher, negotiating a contract, and interfacing with that publisher’s staff to shepherd them into print.

I’m calling this a win. Plus, a sane normal publisher won’t give me fancy leather covers. 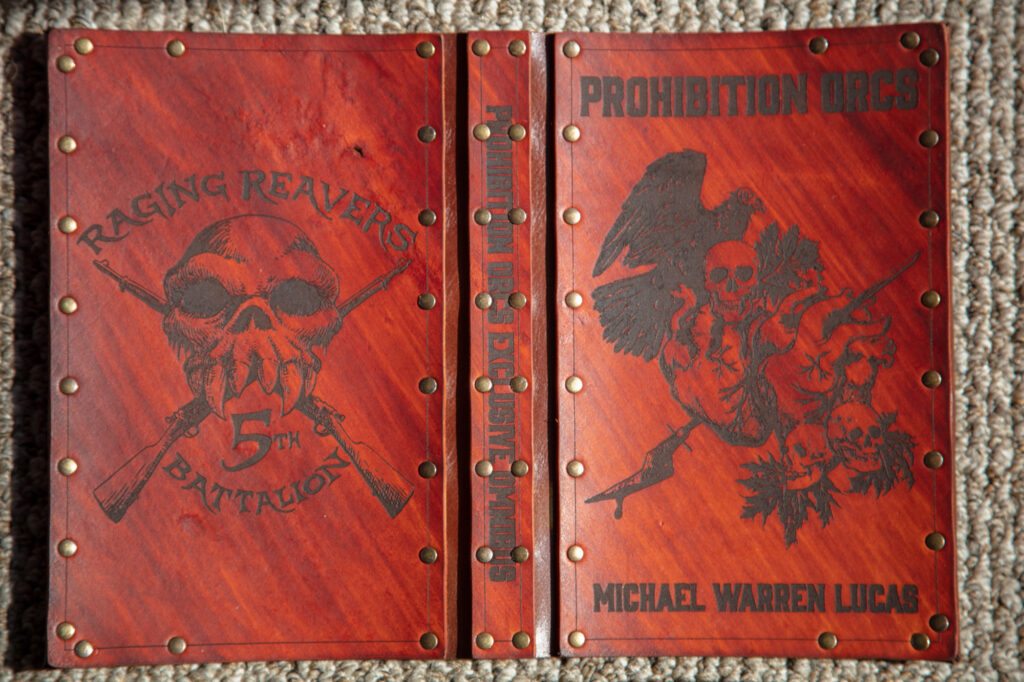 Yes, this post is here to remind followers that the campaign is about to end and you should back now if you’re going to. I also wanted to mention my live reading of the PO tale Woolen Torment.

One of the Kickstarter stretch goals was recipes. A “friend” of mine saw that and decided he would contribute, by making orcish ice cream. Four different kinds. I tried them. On camera. Live. For your amusement. Content warnings for phrases like “punt it into the Sun” and “lick the bottom of the rat cage.”

I feel compelled to share this. After all, many of my readers love to watch me suffer.

Over in OpenBSD Mastery: Filesystems land, I spent yesterday writing about dumpfs and how modern UFS respects disk geometry. (It doesn’t, except when it does.)

Over in Kickstarter land, I got a sample over the Orcibus’ leather cover.

I’m contemplating offering a leather cover when I do the OMF Kickstarter.

Gut reaction, of course, is that this would be stupid. Nobody wants a fancy tech book. But I thought nobody would want a hardcover tech book, yet folks buy them. Must ponder.

No matter what, though, I needed to show this off.

I hoped that the Prohibition Orcs Kickstarter would break $5k in thirty days. That would give me the complete custom covers, and let me publish my Dream Orc Books.

Instead, it’s over $8k in less than half that time. This is the most I have ever been paid for a work of fiction, and it’s not even out yet. (Lifetime sales on some novels are higher, I’m sure, but I don’t have the accounting software to figure that out. Nobody does.)

It’s also following the same trend as the Badgers kickstarter: busy for ten days, pretty flat for ten, and a last minute surge over the final ten days. I might make the next one only twenty days, to see if I can cut out the sagging middle. Pretty sure it won’t actually work that way, but this is all an experiment and nobody knows anything, so why not?

I’m especially surprised that so many folks are buying the leather-covered Orcibus.

As part of the Kickstarter, I also recorded me reading Woolen Torment, in its entirety. Yes, yes, I have a face for radio and a voice for print, but it’s a thing.

If the Kickstarter hits the $25k stretch goal, however, I will get my first ever tattoo. A few of my readers who are especially interested in me experiencing pain and scarring would like me to have a tattoo. I figure this goal is low enough to encourage those folks to shill the campaign to others–after all, it’s nearly realistic!–while being high enough to keep my hide intact. But they’ll enjoy threatening my pasty complexion with color, so it’s all good. Here’s the black and white art that will be engraved on the orc-hide Orcibus, and maaaaybe on my hide.

Sixteen days left if you want any of the exclusive rewards. Or, just wait until it goes in my bookstore. Whatever.

At long last, I’m publishing a collection of Prohibition Orcs tales and a full-length PO novel. I’m using a Kickstarter to fund the initial expenses, so that I can afford custom art and a few extras.

If you’re a Patronizer, you’ll automatically get books as per your patronage level. If you want the fancy but expensive Orcibus bound in authentic orc leather, you’ll have to get it through the Kickstarter I’m afraid.

Once the books go live, the individual chapbooks will go out of print. Grab them now if you want them.

I’ll be giving my “OpenSSH at Scale” talk at SeMiBUG tonight, followed by a Q&A. 7PM Eastern time. Based on the second half of my book SSH Mastery.

Join at this link.

Stop by, say hi, listen to me babble about SSH principals and certificates and LDAP and stuff.

The folks at Penguicon have released the schedule to presenters. It’s not public yet–it will be soon, promise!–but here’s my little slice of it.

It might change. Things happen. But this is where you’ll find me.

The other question folks have is: will my books be there? Of course. The bookstore will have git commit murder, git sync murder, and Cash Flow for Creators. I could only pick three, and those seemed like the broadest interest. (I’m not knocking Penguicon for only taking three titles, I’m grateful they are taking any.

I’ll have a few copies each of these with me:

Might be paperback or hardcover. First come, first served. I don’t plan to restock until after covid.

Hope to see you there!